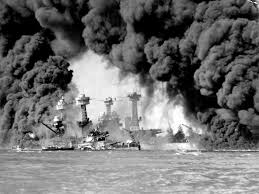 On this day the war in the Pacific commenced when 353 Japanese aircraft launched from 6 aircraft carriers some 350km from Hawaii.

The attack resulted in the sinking of six American ships (three of which were subsequently recovered and returned to service), the destruction of 188 aircraft and the loss of approximately 2400 lives. Luckily the six aircraft carriers of the American Pacific Fleet were not in port at the time and their use in the subsequent battles of the Coral Sea in May 1942 and Midway in June 1942, resulted in subsequent American Naval superiority for the remainder of the war. Pearl Harbour brought America into the war for the first time, and with the declarations of war on the US by Germany and Italy 4 days later the US suddenly found itself fighting a war in two theatres.