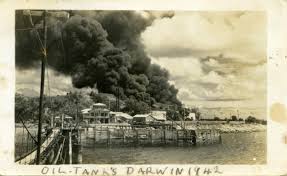 On this day Darwin was BOMBED for the first time in World War 2.

A further 63 raids were to follow over the next 21 months.

188 Japanese aircraft were launched from 4 aircraft carriers to the north west of Darwin arriving with total surprise just before 10am. The first raid lasted around 28 – 30 minutes. A follow up raid by 54 land based high level bombers arrived around 2 hours later and attacked the airfields. These two raids were to be the most devastating attacks on Australia during the war.

Prime Minister John Curtin in a speech that night said “A severe blow has been struck in this first battle on Australian soil. It will be a source of pride to the public to know that the armed forces and civilians conducted themselves with gallantry ………. we must face with fortitude the first onslaught and remember that whatever the future holds in store for us we are Australians and will fight grimly and victoriously ….. Darwin has been bombed but it has not been conquered.”