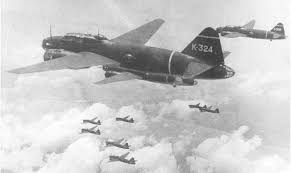 On this day 16th June 1942 at 12:0pm (midday) there was another bombing raid on Darwin. The raid included 27 B4M (Betty) bombers and 27 zero fighters accompanying them. In the ensuing fight 5 P40 kittyhawks were shot down or badly damaged and then wrecked in attempted landings, while two zeros and two bombers were shot down. This again demonstrating that the Japanese at this stage of the war were far from a spent force and that the allies were yet to establish air superiority over Darwin.